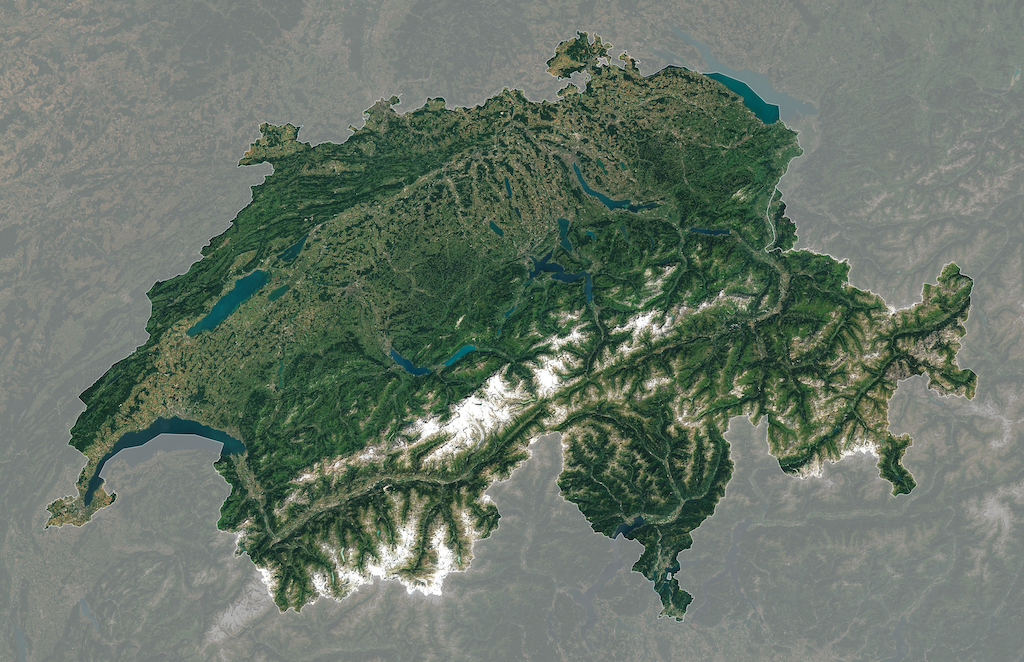 The Swiss Data Cube (SDC) is an innovative technology that gathers all available satellite images from the American Landsat program and the European Sentinel 1 and 2. UNEP/GRID-Geneva, the University of Geneva (UNIGE), the University of Zurich (UZH) and the Swiss Federal Institute for Forest, Snow and Landscape Research (WSL) have ente- red a new cooperation agreement to foster the use of Earth Observation data for environmental monitoring at national scale.

The increasing population, urbanization and development of infrastructure in Switzerland generate pressure on natural resources and biodiversity. This pressure will be intensified by the impact of climate change. Given its small and densely populated territory, Switzerland needs to achieve the best possible land management which requires continuous monitoring to assess priorities, compliance to policies and progress. “The SDC will deliver a unique and near real-time capability to track various environmental changes: climate, vegetation, water quality, urbanization, cropland, natural habitats. It will enable more effective responses to problems of national significance,” says Gregory Giuliani, Head of Digital Earth Unit and Swiss Data Cube project leader at GRID-Geneva, UNIGE Institute of Environmental Science (ISE). It will provide ready-for-use information as evidence for developing policy advices, land planning and environmental assessments.

Ready for use by non-experts

Since the launch of the first Landsat satellite in 1972, Earth Observation satellites demonstrate their impressive power for monitoring environmental change through space and time. Previously, the access to this information was restricted by the cost of data, computational power, storage, expenses and the complexity of data processing. Nowadays, data from numerous satellites are freely accessible while computational power and storage allows processing big data. “The Swiss Data Cube technology is abolishing the last barrier, i.e. the data processing complexity. It does this by automatizing the image processing of large amount of satellite imagery and brings this data at a level where it is ready for analysis even by non-experts”, explains Michael E. Schaepman, Professor at the UZH Department of Geography.

Switzerland is one of the very few countries in the world to have a national-scale satellite data cube. “The SDC was initially developed by UNEP/GRID-Geneva for the Swiss Federal Office for the Environment (FOEN) and supported by the cloud computer infrastructure from the University of Geneva” recalls Pascal Peduzzi, Director of the UNEP/ GRID-Geneva, United Nations Environment Programme and Professor at the Dep. F.A. Forel for environmental and aquatic sciences, UNIGE Faculty of Science. Now the SDC can rely on two additional partners: the University of Zurich (UZH) through its Remote Sensing Laboratories and the Swiss Federal Institute for Forest, Snow and Landscape Research (WSL). Each partner is bringing its own scientific knowledge and staff. Working together, these four institutions will pull from their mutual expertise on Earth Observation to bring the Swiss Data Cube to an operational level.

This data cube is highly enhancing the way users can interact with this data. All the complexity of the calibration and corrections is automatically computerized, thus minimizing the time and scientific knowledge required for dealing with satellite imagery. Based on an analytical cloud-computing platform, the SDC is an innovating tech- nology allowing users the access and visualization as well as the possibility to analyze satellite images from Landsat, Sentinel 1 and Sentinel 2 data from 1984 to now. Images from satellite sensors covers all Switzerland at 10 to 30 meters spatial resolution and twice per week. “The SDC currently includes more than 10’000 images and is updated daily. I expect that it might help the Swiss Confederation, cantons and municipalities to practice environmental monitoring and standalone reporting” says Charlotte Steinmeier from the Swiss Federal Research Institute WSL. It will also allow scientific institutions to fully benefit from Earth Observation data for research and innovation.

A cooperation with immediate results

This new agreement, reinforce Switzerland’s position as one of the leading countries on this Data cube technology. It is expected to foster collaborations, incubate new ideas and projects, innovate and promote this expertise at national and international levels. This coopera- tion is already bringing immediate results. For example, UZH provides the entire Sentinel-1 radar data for Switzerland, adding more than 4 years of radar data into the SDC, making it one of the few Earth Observation Data Cube in the world to include Landsat, Sentinel 1 and Sentinel 2 data. It also brings new algorithms developed by WSL, for instance on drought monitoring.

The SDC is contributing to the national “Digital Switzerland” strategy by supporting innovation; monitoring the progresses made following government’s decisions; improving management of natural resources; stimulating research; supporting the decision processes and improving data access and use to generate new products and services.

Major update of the SDC available!